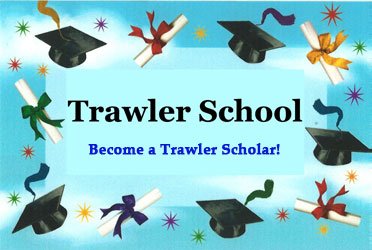 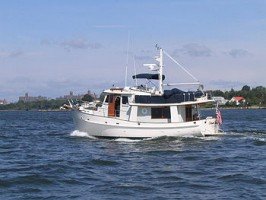 A few years ago, my wife Sharon and I started to came upon a crazy dream – spend six months island hopping in the Caribbean in our own boat. It was an exciting thought for a pair of land-locked prairie dwellers, but was it do-able? We searched our local library and found a book about a couple who took their whole family around the world in a sailing ship, and almost died in the process. We noticed some other drawbacks. You needed to know how to repair sails. The sails needed wind and sometimes there wasn’t any. And pictures of sailboats in use always showed them listing sharply to port or starboard. Sailing seemed like way too much work. Sailing wasn’t for us.

So we switched our focus to powerboating. We started looking at books on powerboating and realized there were many shapes and sizes to choose from. After a fair bit of research, I came to the conclusion that the kind of boat we needed to realize the dream was a trawler. They were roomy enough inside you could actually live on them and, most importantly, they were seaworthy. When I first announced my revelation to Sharon, a picture of Forrest Gump’s shrimp boat loaded with nets and stinky fish came to mind and she thought I had gone nuts. But when I showed her pictures of Grand Banks and Mainship trawlers, and she saw they had kitchens, bathrooms and bedrooms, she started to see the possibilities.

What were we to do now? Would we simply buy a trawler and learn the ropes by bitter experience like some other couples had done? A review of our bank account quickly told us we wouldn’t be buying a boat anytime soon. But that was perfect: in the mean time, we could get some experience, only in someone else’s boat. Two summers ago, some friends of ours generously loaned us their cottage and boat for a week and we had fun navigating around the many islands and bays of Lake of the Woods in Ontario, Canada. We enjoyed that, but what we really needed to do was to try out one of those trawler things and see if they were really our kind of boat.

That’s when we stumbled upon the website for Trawler School Charters. Operating out of Dania Beach, Florida, Captain Bob Hamilton has been offering hands-on trawler piloting courses for six years. What attracted us most was that, for five days, it would be just my wife and I and Captain Bob. We would not only be doing most of the piloting ourselves but we would also learn about navigation, marine diesel engine, marine electrical systems, and how to buy a used trawler. To top it all off – and Sharon really liked this part – Captain Bob would be cooking all the meals! So we decided to take the plunge. We booked a five-day course, mailed in our money and on March 29 boarded the 40-foot sundeck trawler “Miami Mermaid”.

No sooner had we left the slip at Dania Beach, Bob handed me the helm and told me to take a left at the Intracoastal Waterway or ICW. This was a sample of what was to come because my wife and I did most of the piloting during the course – definitely hands-on. After the boat was anchored in a bay off the ICW and we devoured a delicious eggplant dinner, it was time to hit the hay before our 40-mile cruise the next day to Boca Chita Key in the upper Florida Keys. We’d been given the roomy aft stateroom with a large double bed. That night, we learned we could sleep quite soundly in a trawler even though it felt like we were surrounded by a giant aquarium. I half expected to see Nemo staring at me through one of the stateroom windows in the middle of the night!

It was gorgeous weather the next day as we headed down the ICW past Miami and into the warm, green waters of Biscayne Bay. There was something empowering about piloting a boat past the Port of Miami and its towering skyline. As the skyscrapers faded into the distance and Biscayne Bay stretched out ahead, we learned how to depend on what Captain Bob affectionately referred to as “captain-know-it-all” – a Garmin GPSMAP 178C chartplotter mounted next to the upper helm. We learned how to use this great piece of electronic gear along with the autopilot. All we had to do was “stay in the white” and keep our eyes open. And it worked.

Boca Chita Key is an idyllic island in the middle of Biscayne National Park. It even has its own sparkling white lighthouse. Some people had pitched their tents in the campground. Others, like us, slept on board their boats moored in the protected oval harbor. We found a beautiful secluded coral beach and soaked up the warm Florida sun before returning to the boat for a mouth-watering pork dinner prepared Jamaica style. Yes, we could definitely get used to the boating life.

Next morning, we set off for No Name Harbor near the southern tip of Key Biscayne (which is ironic because that’s its name). But there was a catch – Captain Bob wanted us to use the chart to find a short-cut. After studying the chart for a bit, we came up with what we thought was a safe, navigable route to the harbor without putting an end to both his boat and the charter school. We were correct! Maybe we were better at this trawler piloting stuff than we thought we were.

Located in Bill Baggs Florida State Park, No Name Harbor is also home to Boater’s Grill where I downed a delicious meal of Cuban-style pan-fried grouper. The anchorage fee includes a tour of the newly-renovated, 95-foot white-brick Cape Florida lighthouse. After soaking up the sun at a beautiful beach on the Atlantic Ocean side of the Key, we walked back to the Miami Mermaid via the tree-lined coastal trail. It was time to power up and head for our final destination of the day, stopping for a short time en route at Hurricane Harbour surrounded by expensive homes. We arrived at Marina Stadium shortly after a gorgeous sunset. Named after the water sports stadium located on the south side, the Marina Stadium anchorage offers a spectacular view of the Miami skyline less than two miles across the bay to the west. Opposite the skyline, a big harvest moon rose above the sultry horizon of Virginia Key. By this point, we were totally sold on the trawler lifestyle.

Next morning, Captain Bob had a special treat for us – a visit to the legendary Jimbo’s Place nestled next to a manatee-frequented lagoon on the northeast end of Virginia Key. Jimbo’s is a rare piece of Old Florida which started out as a shrimper’s base and bait house in the 1950s. A verbal agreement with the City of Miami allows Jimbo Luznar to keep his business there for the rest of his life. But it might not be there for much longer– both the property and Jimbo, who turned 83 on April 11, are showing the signs of age. On the east side of the island is the picturesque Virginia Key Beach Park. We walked to the north end where we had the beach to ourselves– just a couple of miles from bustling Miami.

Reluctantly, we pulled ourselves away from our piece of paradise and returned to the Miami Mermaid for the last leg of our journey past the upscale properties lining the ICW to Dania Beach. It was an amazing adventure and also a lot of fun. Now we are looking forward to next year when we plan to put our experience to good use and take out our own bareboat charter. See you next year, Florida!

Trawler School Charters ensures professional teaching skills. Trawler school has had hundreds of satisfied customers and we have every client’s hand written testimonials from day one. Click on (clients testimonials) and see what they had to say. Read More…

Made with ❤ with ProtechZi Digital Media​